Posted on March 7, 2019 by womenwritingthewest

This week, we are joined by WWW member Cynthia Leal Massey. In one of her recent essay/blog posts, Cynthia reminds us all (including herself!) how important it is to check into historical facts a few times over when we write about the good old days. Enjoy! 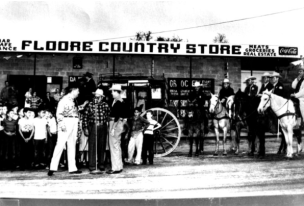 After my book, Helotes, Images of America was published, a friend and descendant of a pioneer family in Helotes called me. She asked where I got the date for the picture I used on the cover shot. The cover shot is the iconic photo of John T. Floore Country Store’s grand opening that has been published through the years in local newspapers and other venues. I got the 1949 date from a reputable newspaper published in the 1980s.

My friend told me the date was incorrect. She knew it was incorrect because she was going to Helotes Elementary at the time and she knew several of the children in the picture. She said the date was either 1952 or 1953, and she gave me contact information for a couple of the boys (obviously now men) who were in the photo to corroborate her assertion. I called both and they both agreed the picture was taken in the early fifties, but were not sure of the exact year. Not long after my friend’s call, another old-timer told me his father had taken pictures of the original Floore Country Store location (the old Rigg’s grocery store building, today’s Helotes Art Gallery), which was still open in the early 1950s. “The dance hall was not built yet,” he told me.

I am registered with Newspaperarchive.com (an invaluable fee-based research tool) and decided to check the newspapers for those years to see if anything was written about the dance hall being built and its opening. I figured there would be. John T. Floore was a showman and publicity hound. I found the articles, and the dates jived with what my eyewitnesses told me.

In an April 5, 1950, San Antonio Light column, “Around the Plaza,” columnist Benwicke Cary wrote: “John T. Floore, the country store owner and real estate developer, is among those in the big middle of things, rushing plans on a new dance hall. He says, ‘We already have one dance hall, but there’s room for another. I want to catch some of the overflow crowd that comes here on Saturday nights for country style dancing’.”

Two years later, on Saturday, September 13, 1952, John T. Floore formally opened the doors of the Floore Country Store Dance Hall and Kitchen, according to San Antonio Express columnist Bill Freeman, who wrote about the event the next day, in his Sunday September 14thcolumn.

What I learned from this was that the rule of three should be the norm for researchers. Find at least three different sources to verify an account. Newspapers are fine, but they are not always correct. In fact, the dailies are often missing information or provide incorrect information because reporters don’t have the luxury of time. Often, subsequent newspaper issues tell more of the story and correct misinformation; sometimes they continue to print errors (as the 1980 article I used to date the picture did). Also, find people who were there for corroboration. That is not always possible, but still the rule of three applies. Find three sources to corroborate a story or supposed fact.

Ultimately 1949, rather than 1952, isn’t a catastrophic error. But it is an error. Because it is published in the first edition of my book, I’m afraid that date may stand for some time to come. Mea culpa.

For more about Cynthia, or to follow her blog, you can visit https://cynthialealmassey.com/blog/.

Women Writing the West is an organization of writers and other professionals who write and promote writing about the North American West with emphasis on the experiences of western women and girls. We invite you to join our writing community. Membership is open to all persons, worldwide.
View all posts by womenwritingthewest →
This entry was posted in WWW General News. Bookmark the permalink.