Posted on January 16, 2019 by womenwritingthewest 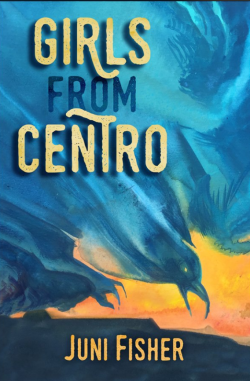 WWW member Juni Fisher released her debut novel, Girls from Centro, on November 12, 2018, a coming-of-age, contemporary tale with a strong Hispanic backbone that tackles the question of immigration, poverty, family, and sacrifice.

Teresa sells souveniers to tourists and feeds her father’s fighting roosters. Ana, a young single mother, cooks at a convent and orphanage. Both young women are offered the chance at ta better life in the United States, and both decide to walk away from their existence to fight for a new one. For Teresa and Ana, the dangers and the uncertainties are worth paying a price. But will the challenges along the way be worth it to reach the dream of life beyond the border?

Juni Fisher was raised in the San Joaquin Valley on a California farm. Riding horses, playing her guitar and singing have all been central to Juni’s life from little onward. Her first country music song was released in 1999 and with the accolades received, Juni made music her full-time gig, though her first novel adds ‘author’ to her list of achievements. For more, visit: junifisher.com

This entry was posted in New Releases. Bookmark the permalink.